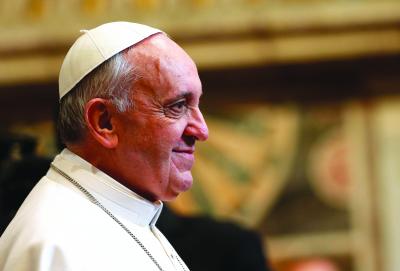 Like most of the world last spring, I watched in fascination as Jorge Mario Bergoglio was elected Pope. The first day, I was non-plussed. Another old, white guy? Big surprise. The second day, I began to take notice: he was a Jesuit and he chose the name Francis, the first Pope ever to do so. The third day, I got a little discouraged as Catholic pundits and news organizations across the nation scrambled to prop up his conservative credentials and hard line stances. But as the week unfolded, I heard the stories of how he paid his own bills, carried his own bags and rode in a modest sedan across town and my heart melted a little bit. Then came his ordination and in one 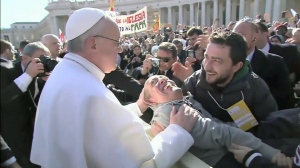 simple gesture, stopping to cradle a disabled man in his arms, he captured my imagination. I was willing to entertain the possibility that he just might be a different kind of Pope.

Reading the full interview from America Magazine confirmed it. Yesterday, my Facebook feed was abuzz with quotes, excerpts and articles about the interview, but it wasn’t until this morning when I read it for myself that I understood the import of what he had to say. I know journalists and news organizations need the juicy bits, and so focused on his words about homosexuality, abortion, divorce and birth control. Those issues concern me too, but I wanted to know the context. Did he really mean it that way? Did he follow up his compassionate comments with an even stronger emphasis on obedience to the Church, its hierarchy and doctrine?

Instead, Pope Francis offered an avalanche of Love, a deluge of Compassion, a flight of Hope. What I found most striking as I read the article was the consistency of his theme, no matter how far-ranging the topic. It was simply this:

That is the bottom line, according to Pope Francis and when you are loved, you are forgiven and you are cherished. Your presence and company are desired. The Church is “not a small chapel that can hold only a small group of selected people,” rather “it is the home of all.” He takes it a step further, strengthening a connection, which has become frayed and worn in recent years. He seems to say to each of us, “You belong to God and as such, you belong to God’s Church. As Christ’s servants on earth, you are our beloved and we must do a better job of treating you as such.”  He calls on the members of the church, particularly the clergy, to focus on the “proclamation of the saving love of God” before all else.

A few minutes after I finished the interview, I received an email from my brother, a soft-spoken, easy-going man and a practicing Catholic. This is what he wrote:

“This article almost brought me to tears…I LOVE OUR POPE. This pope can help this church heal wounds with love. He will open the doors to the church to people who have felt excluded. He will inspire the members to LOVE.

I believe he is exactly what the church needs at this time.

I’m excited to be led by a guy who ‘gets it.’ The teachings of Christ were about loving one another not about following all the rules.

(Is it okay to refer to the pope as a guy? I think he would be okay with it!)”

And I laughed, because those were my very thoughts. Pope Francis “gets it.”

He knows compassion and mercy must come before discipline and correction. He wants to see church ministers behave “like the good Samaritan, who washes, cleans and raises up his neighbor,” instead of simply saying, “Get up and walk” – on the straight and narrow path.

As another theologian I know puts it, “Love wins” and Pope Francis may just have won my heart, by being so open, vulnerable, and humble, unafraid of mystery and content to go where God leads him. I like that in a guy.

He may not be the man of my dreams, but he’s allowed me to dream of a new direction and a new future for the Church.

If you haven’t read the full interview, it is well worth the time and can be found here.