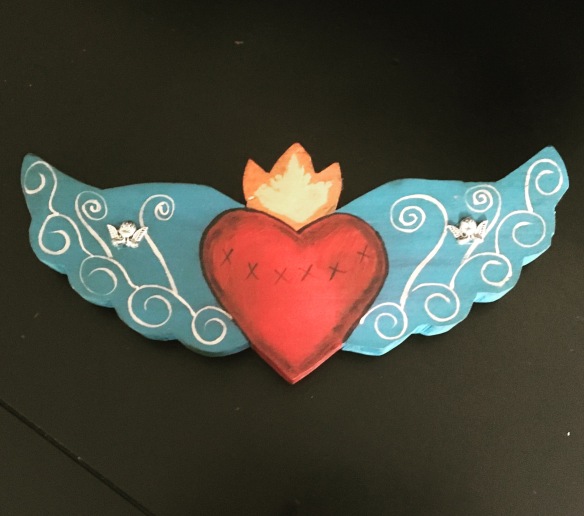 We are finally at the end of this linguistic journey through some of the central themes of creativity. Thanks for going with me. We make so little time to explore subjects that make us uncomfortable; we’d much rather tread on familiar ground. But pushing ourselves to write these letters, (instead of just thinking about writing them) is one way to check out the terrain and see where new roads might lead. We can decide later if we want to take those roads, but if we never get a bird’s eye view of the area, we’re not likely to set out on the adventure.

Liz Gilbert was really intentional about choosing this word. She didn’t want to use God, because it carries so much baggage and can also be limiting. In any given audience of real life bodies, or readers, there may be atheists, agnostics, Christians, former Christians, Muslims, Buddhists, Hindus, Jews and others. We all have a different word for the Ultimate Source of Life and Love, and each word carries a different nuance. The Divine has as many manifestations as there are people on earth, birds in the sky, flowers in the field, or stars in the universe. While a mystery is something “ultimately unknowable,” the Divine Mystery might be better described as “endlessly knowable.”1 We’ve been describing it for millennia and it’s pretty clear we’re not losing steam.

Now, a mystic has a very important job. A mystic is someone who has had an intimate experience of the Divine, and it is their sacred duty to share what they learned from that experience. Some do it well and publically, while others do it quietly in their everyday lives, but no matter what time period a mystic lived in and no matter what faith tradition they came out of, virtually every one of them shares the same message. If we believed what the mystics have been saying for thousands of years, it would change everything! While I might have shot for more poetic language, Liz Gilbert nailed it.

We’re all fine! It’s going to be okay. Don’t be afraid.

Let me repeat that mystical message for the 98% of us who didn’t get it.

We’re all fine! It’s going to be okay. Don’t be afraid.

That, my friends, is the “fall out” from a Divine experience. You know you are safe; you are secure; you no longer sweat the small stuff.

As you can imagine, this makes mystics difficult to live with. They come back fearless, taking on their culture and traditions, theologians and authority figures. They don’t want to destroy those things; they just know those things are beside the point! Religious leaders believe it will all be okay too, at least for some of us, at some point, but they believe the only way to get there is through rule-keeping and discipline. Mystics just jump ahead to the finish line. They want to share the gospel, the good news, that it’s all going to be okay and since it’s going to be okay, IT’S ALL OKAY RIGHT NOW!

See what I mean about changing everything?

What would you do? How would you behave? What risks would you take if you knew that the story ends with you in Love, existing happily ever after?

Despite what you might be thinking, this isn’t pie in the sky, airy-fairy stuff! Knowing that it’s all going to be okay doesn’t let us off the hook from trying to change things in this world. Rather, it inspires the mystics to work harder to make what is Ultimately True more true in the here and now. If I believe the mystics and I see my sister struggling, I can’t just say “Chin up; it’s going to be okay!” Rather, I have to engage in her life in such a way that it actually becomes more okay. If my brother is oppressed, I want to get down under that pressure with him and help lift his burden. When it is all said and done, the mystics inspire us to act in ways that make our current reality a greater reflection of the Divine Reality, (which they experienced as the Ultimate Reality during their mystical experience).

So in the final moments of this really special day, LG asked us to consider:

What would you do if you knew it was all going to be okay?

While it might be nice, most of us will never have a mystical experience. We probably won’t levitate, have visions, or experience “union with all that is.” But that’s okay! The mystics can be TRUSTED, Rob and Liz insist, because they never change their story! We are all going to be okay!

If we were willing to go with that idea, then we were ready to write our final letter to our FEAR from the DIVINE. The first letter we wrote in this series was from our FEAR, telling us all the reasons we shouldn’t live and respond from our hearts, whether it was in art, work, or life. This final letter was an antidote to that narrative.

Yes, FEAR is right. We might fail; we might screw up and get our ass kicked, but you know what?

We’re fine! It’s going to be okay. Don’t be afraid.

We might lose a job, get our heart broken, be disappointed, but you know what?

We’re fine! It’s going to be okay. Don’t be afraid.

I like that message. I like how it made me feel. My heart simultaneously swelled with hope and shrank with dread, but that’s a paradox I can live with. That is the kind of creative tension that leads to evolution, to change and growth, inspiration and COURAGE.

And so, finally, from the DIVINE:

I see you. I hear you. I feel your pain and I know you are doing your best to protect Ali. But let me tell you, it’s going to be okay. FEAR, dear one, I’ve got her and I’ve got you too. There is no place she can go that is separate from Me, outside my care, or Love. What Ali does best is Love people and when you are in charge, she stops Loving others and starts trying to protect herself. That’s not good for her, or anyone else for that matter. So FEAR, please remember, Ali wasn’t an ugly duckling. That’s what you called her. She was a swan all along; she just didn’t know it and she doesn’t need your Chicken Little shtick amplifying the drama. The sky isn’t falling! Let her remember what she knows deep down anyway:

We’re fine. It’s all going to be okay. Don’t be afraid.