We are just over a week in to Lent 2014, and I have to say, it’s been a rough week, a really, really rough week. Here is a reminder of what I am trying to do without:

I knew I put a lot of things of things on that list, but I felt called to all of them, because they center on a common theme: distraction. Distraction is a dragon I have to face and I felt encouraged recently after watching an interview with Steven Pressfield, the author of The War of Art. He said that when face our dragons, our greatest fears, they go “poof.” They disappear before our very eyes and we get to the treasure on the other side.

Steven, you were wrong. I’m a week into facing my dragon and it hasn’t even blinked. If anything, its hot breath on my neck is starting to make me sweat.

I deleted the bookmarks for Facebook on my phone and browsers, but every time I sit down to work, I am conscious of the fact that only eight keystrokes separate me from a broken promise and the Promised Land. I think of the articles I’m missing and the information I’m having to do without, the pictures of adorable kids I don’t get to “like.” Sigh. I find myself at the market and the library (the two “stores” I’ve let myself enter), perusing each and every shelf for just the right thing, the thing I don’t need, but that would bring me joy to consume. On these unusually warm winter nights, I long for a cold glass of white wine. Finally, and perhaps funniest of all, I find myself daydreaming of Diet Coke. I have actually caught myself fantasizing about pulling through the McDonald’s drive-thru and taking my first sip through their perfectly calibrated straws.

I have felt bereft this week, mourning the loss of my first level addictions, the habits that give me the quickest highs. But I’m also saddened by how quickly and easily I’ve turned to other distractions. Instead of going deeper into my work and writing, I’ve revamped powerpoints I made for classes just weeks ago. I’ve swept and dust-bustered every room in the house.  I spent an entire evening researching a new broccoli recipe, and several hours the next day preparing it, and my family doesn’t even like broccoli. Neither do I. What am I doing?

My parents, who have always been seekers, found a book in the late eighties called The Enneagram: A Christian Perspective by Richard Rohr and Andreas Ebert. The enneagram is an ancient tradition that introduces nine patterns of thinking and behavior that most of us, despite all our illusions of being unique, free and mysterious, actually fall into fairly neatly. 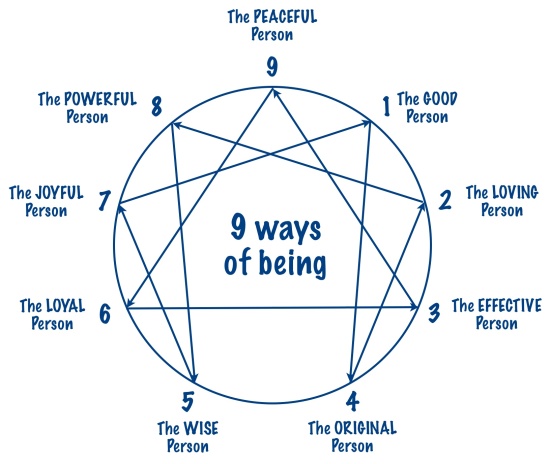 The Nine Personality Types of the Enneagram

1. The Reformer. The principled, idealistic type. Ones  are conscientious and ethical, with a strong sense of right  and wrong.  At their  best: wise, discerning, realistic, and noble. They typically  have problems with resentment and impatience.

2. The Helper. The caring, interpersonal type. Twos are  empathetic, sincere, and warm-hearted. At their Best: unselfish  and altruistic, they have unconditional love for others. They typically have problems with possessiveness and with  acknowledging their own needs.

3. The Achiever. The adaptable, success-oriented type.  Threes are self-assured, attractive, and charming.  At their Best: self-accepting, authentic,  everything they seem to be. They typically have problems with workaholism and  competitiveness.

4. The Individualist. The introspective, romantic type.  Fours are self-aware, sensitive, and reserved. At their Best: inspired and  highly creative, they are able to renew themselves and  transform their experiences. They typically have problems with melancholy,  self-indulgence, and self-pity

5. The Investigator. The perceptive, cerebral type. Fives  are alert, insightful, and curious. At their best: visionary pioneers, often ahead of their time, and able to  see the world in an entirely new way. They typically have problems with  eccentricity, nihilism, and isolation.

6. The Loyalist. The committed, security-oriented type.  Sixes are reliable, hard-working, responsible, and  trustworthy. At  their best: internally stable and self-reliant, courageously championing themselves and others. They typically have problems with self-doubt and suspicion.

7. The Enthusiast. The busy, productive type. Sevens are  extroverted, optimistic, versatile, and spontaneous. At their best: they focus their talents on worthwhile goals,  becoming appreciative, joyous, and satisfied. They typically have  problems with impatience, impulsiveness and distraction.

8. The Challenger. The powerful, aggressive type. Eights  are self-confident, strong, and assertive. At their best: self- mastering, they use their strength to improve others’ lives,  becoming heroic, magnanimous, and inspiring. Eights  typically have problems with their tempers and with  allowing themselves to be vulnerable.

9. The Peacemaker. The easy-going, self-effacing type.  Nines are accepting, trusting, and stable. At  their best: indomitable and all-embracing, they are able to  bring people together and heal conflicts. They  typically have problems with inertia and stubbornness.

**These descriptions were excerpted from the Sukha Wellness Center blog in Avila Beach, CA. For longer descriptions of each type, you can go to their blog by clicking on their name.

Although the list at first glance might seem like fodder for cocktail party conversation, or a cheesy pick up line, the enneagram is actually brilliant psychology. Rohr often says in his work that, “We don’t see things as they are; we see things as we are.” In other words, our vision is shaped by our own personal experiences, prejudices, and default settings. Two people can experience the same behavior, the same opportunity, or the same outcome and perceive it completely differently. Too often, we think that means the other is wrong. In contrast, the enneagram offers us a way to see the reactions of others more compassionately. It  doesn’t mean you give in to their wishes, or desires (unless you’re a two), but that you understand and acknowledge their position, which is simply the basis of good, interpersonal, communication skills.

My parents were immediately able to identify themselves in the numbers (my dad’s an eight and my mom’s a three) and became more conscious of the choices they were making. In some ways, they literally became different people, because they saw themselves for the first time, as they were, not how they had imagined themselves to be. I assume their conversations also included psychoanalysis of their four kids, but they didn’t project their ideas on us. Rather, they left the book open on their nightstand, which I took as a personal invitation to join in.

When I was seventeen, I thought I might be a nine, because I’m pretty easy-going and flexible. I wanted to be a four, because really, what teenage girl doesn’t think of herself as an artist? But when it came right down to it, I’m a seven at heart. I can turn any time into a good time. Bad things are never really that bad. If something is fun, my first question is, how can we make it funner? (If you need any proof that I am a seven, look no further than my use of that word. I’m an English professor, yet my lexicon would be incomplete with out the grammatically-incorrect adjectives, funner and funnest. Tim says you should look no further than me on the dance floor, our summer vacation plans, or the stash of candy in my car.)

Being a seven has brought me through some of the darkest days of my life, from my mother’s cancer, to my unplanned pregnancy and adoption, to the miscarriage of our first child together and even this long recession that has so decimated our small business. But in every dark night, I discover a patch of moonlight to dance in. I instinctively locate the pinprick of brightness and worm my way in. Once there, I push against the boundaries of the night that try to hem me in. I force back the darkness, sadness and pessimism, with hope and humor and joy, until the ones I love are standing in the light again.

That’s the bright side of being a seven.

The dark side is what I am facing this Lent. Sevens are easily distractible, frequently bored and hard to pin down. We don’t like to make decisions, or stay put for too long. We knew FOMO long before it became a “thing.” It’s in our DNA. (For readers over 40, FOMO is the Fear of Missing Out and it’s sweeping the nation.) If a seven isn’t careful, the consequence of their shadow side is a history littered with abandoned people and projects, a life that stays on the surface of everything, because depths always leads to darkness.

Enneagram teachers make it clear that there is a whole range of health and maturity for each person within their own number. An unhealthy, or unredeemed person of any type does a lot more damage (unconsciously and frequently with good intentions) simply by following their instincts, than someone with more self-awareness and control.

Giving up so many of my favorite things is not about self-denial, asceticism, or weird Catholic guilt. It’s about self-awareness and freedom. When I feel an overwhelming urge to do something new, I want to do it for the right reason, not because I am running away from something else.

One of the highlights of my past week was talking to my little sister.  I was telling her how I was trying to give up my distraction patterns for Lent. She laughed at me, since she doesn’t drink Diet Coke and hates to shop. She’s pregnant, so booze is not an option. She is not a seven, so my struggles are not hers. After she had finished teasing me, I asked her what she does when faced with Blaise Pascal’s realities of existence: boredom, inconstancy and anxiety.  She is an eight, like my father, so after a moment’s pause, she admitted that she picks a fight with her husband, not consciously of course, but she’ll see what he’s doing and find something to criticize. If nothing appears, she’ll bring up an oldie, but a goodie from the past. She’s not being mean, she’s quick to explain; she’s just looking for an “out,” a place to put her energies. Then it was my turn to laugh, because it would never occur to me to create conflict as a stress-reliever.

But we all do it.

Are you curious about yours? This is my best advice when trying to figure it out. Which type do you want to be? That’s for sure not you. Which one gives you a sinking feeling in the pit of your stomach as you read about it? Bingo. You might be on to something there.

At the bottom of the blog are a couple links to websites about the enneagram if you want to learn a little more about it. I can’t recommend them highly, because I haven’t used them on my journey, but they are certainly a place to start. The names I’ve found to be helpful are Rohr, Hudson and Riso, but I am sure there are others, who have come after them. My one caveat is this: working with the enneagram isn’t a parlor trick, or something you do for a feel-good experience. As my dad likes to say, “If it doesn’t bring you to your knees, you’re not doing it right.”