I almost didn’t post this reflection, feeling like it was too small, but when I saw this ad in the Los Angeles Times today, I couldn’t

help myself. If I can save just one of you from sharing my misadventure in movie choice, it will be worth the risk of coming across as completely uncool. I cringe already as I think of my hippest friends, musicians, artists and filmmakers, alike saying,

“You didn’t like the latest Coen brother’s film? What’s wrong with you?”

On the night after Christmas, Tim and I had a rare opportunity to go on a date night with my sister and her husband. A movie was on the docket after our dinner at Eat Chow and three contenders were up: American Hustle, The Secret Life of Walter Mitty and Inside Llewyn Davis. The Coen brothers won, but ultimately, we lost: $20 and two hours of precious time.

I would offer a spoiler alert, but there is nothing to spoil. Nothing happens.

Let me rephrase that. Nothing happens that we care about.

Sure, Llewyn has a life. It’s just not a life you’d pay to watch. I’d pay to listen to him on stage. The music is phenomenal, but the character and the film is crap. He gets women pregnant, pays for abortions, sleeps on couches, drinks too much, takes advantage of friends and then blows up at them. He is smug and scornful of everyone surrounding him. None of those things necessarily preclude him from being a character I root for. The problem is that he doesn’t learn from any of it. He deliberately misses opportunities to do the right thing, or make a decent choice. Even when he tries to do right, it usually turns out all wrong. Basically he’s a prick, who doesn’t have the ability, or desire to be anything different. We all know guys like that, but we certainly don’t pay to watch them in action.

Tim and I needed to cleanse our palate, so we snuck away on Saturday morning and saw The Secret Life of Walter Mitty. 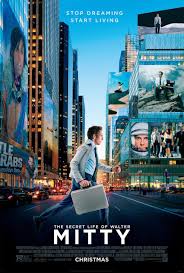 This time, we were thrilled, perhaps overcompensating a bit for the debacle of Llewyn’s life. Walter is a man with a small life, trading it in for big daydreams. He “zones out,” content to imagine whom he might be. But when life amps up its inevitable challenges and Llewyn is content to stew in his inadequacies, Walter finally is not. He will step outside of himself, get on a plane, stand up to the bully, speak to the girl. Standard Hollywood fare perhaps, but well-done, beautifully shot, clever and compared to the Coens’ work, a relief.

Don’t get me wrong. I love art house films. I don’t need happy endings, or easy answers. Not every death needs to be followed by a resurrection, but offering viewers some way to connect, or empathize with the protagonist or villain is almost a requisite for a film to be worth watching (in my mind) and the Coen brothers didn’t provide it this time around.

Ironically, we chose the Coens’ film because of the critical reviews. Raves all around, but as I walked out of the theater, all I could think was that the emperor had no clothes. 93% of critics on Rotten Tomatoes told audiences to go, but I can’t believe 93% of the critics who watched this film and thought it was worth watching. I imagine at least half of them walked out as dumbstruck and disappointed as we were, but were also too afraid to admit it.

So be it. At the risk of coming across as naïve and uncultured, don’t go see Inside Llewyn Davis. Save yourself some time and money; if you like folk music, buy the soundtrack instead.

Saturday #signoflove❤ courtesy of the lad and his sweet girlfriend @julieannepaz found on a Valentine’s beach day. I’m so grateful my kids are always on the lookout for ❤️ just like their mama.
Some of the most Important #signsoflove I find are in parking lots. Strange but true. I am walking in or walking out of a store or business. I’ve found what I wanted or didn’t. I probably feel like I spent too much money or am about to. Since I live in Southern California, I either just got out of traffic or am heading back in to it. There are so many moments of potential irritation, disappointment or not-quite-rightness. But ❤️ comes along and reminds me what is important. I take a moment to breathe, to smile to myself, to remember who I am and What I’m here for - which is basically to Love as best as I can in any given moment. Sometimes I do that well; sometimes I do it poorly, but being reminded in a Lowe’s parking lot is as good a place as any to get the message.
The day is finally here!!! It’s embarrassing how long I’ve been on countdown to see her in person, to have her in my arms and under my roof, to hear her laugh at something her brother says and clap back at her dad with a line from some sick show the two of them love and I refuse to watch, to see her stand next to her sister and see how they’ve changed and grown over the last 6 months and look more alike and yet even more distinctly like themselves. One morning earlier this week, I thought of her coming home and some thing deep within my belly LEAPT FOR JOY. It was the strangest sensation but I immediately thought of the story from the gospel where Mary goes to visit her cousin Elizabeth and the baby in her womb leaps in recognition at the Christ’s presence in utero. Before consciousness, they knew each other. Let me tell you - I dont think that’s an exaggeration. I get it. Like knows like. Love knows love. Heart knows heart. My Christmas wish for you is a LEAP OF JOY, the heart lift that comes when you are surprised by Love and reminded of the goodness of your life and the people who are in it. We have her with us for 7 days and it will go by way too fast and we’ll have to share her with other friends and family and it may be another 6 months before we see her again - though I hope not - so I am going to soak up every minute of it - and remind myself not to hover or parent too much or dread her departure two days after her arrival. No foreboding joy. Just present moment awareness. Just gratitude for the gift of her in my life. @kearakirks
It’s beginning to a lot like Christmas (in San Diego). I met my last pre-Holiday deadline around 4 pm this afternoon and decided to celebrate with a walk on the beach. The Universe decided to celebrate with me. Keep going until you see the final view. For all you liturgical nerds out there, we just celebrated #gaudetesunday a couple days ago. The color was pink; the theme was #joy. I’m calling this #gaudetetuesday -holier than heck and it had me dancing in my bare feet in the sand and water.
When I don’t even want my bad mood taken away, but Love finds me anyway... the mood doesn’t magically disappear, but my self-righteousness does. #signoflove
A little #signoflove to start your day. Squished something on the concrete with a little extra trash in a pretty color. Keep your eyes peeled friends. #SignsofLove are everywhere.
%d bloggers like this: