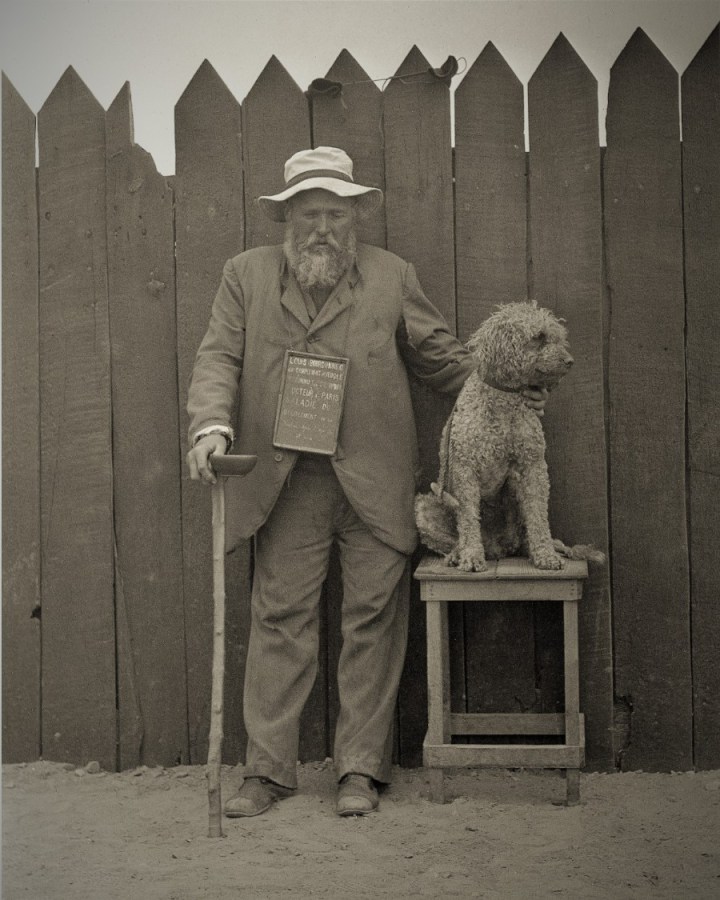 “A Portrait of a Dog as an Old Guy”

When his owner died in 2000 and a new family

moved into their Moscow apartment,

he went to live with mongrels in the park.

In summer there was plenty of food, kids

often left behind sandwiches, hotdogs and other stuff.

He didn’t have a big appetite,

He too was old, the ladies no longer excited him,

and he didn’t burn calories chasing them around.

Then winter came and the little folk abandoned the park.

The idea of eating from the trash occurred to him

but the minute he started rummaging in the

The remnants of a good upbringing lower

I asked him how he sustained himself

in this new free-market situation

when even the human species suffered from malnutrition.

In response he told me his story;

how at first he thought that life without his man

wasn’t worth it, how those

who petted him when he was a pet

then turned away from him, and how one night

he had a revelation.

His man came to him in his sleep,

tapped him on his skinny neck and said:

“Let’s go shopping!” So the next morning he took the subway

and went to the street market

where they used to go together every Sunday and where

vendors recognized him and fed him

“Perhaps you should move closer to that area?”

what my man said.”

Katia Kapovich is a modern Russian poet, who immigrated to the U.S. in the early ’90s.

I wasn’t familiar with Kapovich’s work until I went looking for a “dog poem” and found this one, which immediately charmed me. Sometimes, that’s enough for a poem. Poetry shouldn’t be asked to bear the burden of significance all the time. Sometimes, a poem should be enjoyed, just for the pleasure of it.

For me, one of the highlights of this poem is the personification and cultural relevance that get applied to the life of the dog. He finds himself in a “free-market” economy; he’s too old to chase the ladies, or run around burning calories. His “good upbringing” keeps him from surviving like the rest of his comrades in the park. But all is not lost; he goes “shopping,” finds a sustainable food source, but won’t move any closer, since “oldies shouldn’t change their topography.”  The sweet absurdity of it all made me grin. Kapovich was describing the life of a particular dog, but it could have been my 88-year-old grandfather, or perhaps even her own, with all his peculiar, but dignified ways of doing things in the last years of his life.

Since I have never had the pleasure of growing old with a dog, or the pain of having a dog grow old with me (or perhaps it’s the reverse), my first instinct as a reader is to stick with a surface reading of the poem, the creativity and humor. But if I were a dog-owner and a dog loved me the way this dog loved “his man,” I have no doubt this poem would mean much more.  I can see the tenderness and loyalty of their bond, the cruelty of the new apartment owners who threw  him out, and the kindness of the street vendors who sustained his life, but if I were a dog owner, I would feel it, deeply, on an empathetic level. That’s why I always try to read a poem more than once.  I may, or may not be pleased on a first go-’round, but there is probably something to be learned regardless, an insight into something I know nothing about.

So, thank you, Katia Kapovich for helping me learn something new about a man and his best friend.

When everything is closing for weeks and weeks, including the entire library system, you wash your hands, keep your distance, and check out novels, self help, politics, and psychology, not to mention the two books you bought in the last week to help you feel just a little better. You read about better times and worse times, modern problems and near ancient ones. You check out and you check back in when you can - with yourself, your people, your body and heart, their needs and fears. It’s all sucks but the written word makes it just a bit better.
Earring doodle #signoflove❤ #soberhappyhour
Saturday #signoflove❤ courtesy of the lad and his sweet girlfriend @julieannepaz found on a Valentine’s beach day. I’m so grateful my kids are always on the lookout for ❤️ just like their mama.
Some of the most Important #signsoflove I find are in parking lots. Strange but true. I am walking in or walking out of a store or business. I’ve found what I wanted or didn’t. I probably feel like I spent too much money or am about to. Since I live in Southern California, I either just got out of traffic or am heading back in to it. There are so many moments of potential irritation, disappointment or not-quite-rightness. But ❤️ comes along and reminds me what is important. I take a moment to breathe, to smile to myself, to remember who I am and What I’m here for - which is basically to Love as best as I can in any given moment. Sometimes I do that well; sometimes I do it poorly, but being reminded in a Lowe’s parking lot is as good a place as any to get the message.
The day is finally here!!! It’s embarrassing how long I’ve been on countdown to see her in person, to have her in my arms and under my roof, to hear her laugh at something her brother says and clap back at her dad with a line from some sick show the two of them love and I refuse to watch, to see her stand next to her sister and see how they’ve changed and grown over the last 6 months and look more alike and yet even more distinctly like themselves. One morning earlier this week, I thought of her coming home and some thing deep within my belly LEAPT FOR JOY. It was the strangest sensation but I immediately thought of the story from the gospel where Mary goes to visit her cousin Elizabeth and the baby in her womb leaps in recognition at the Christ’s presence in utero. Before consciousness, they knew each other. Let me tell you - I dont think that’s an exaggeration. I get it. Like knows like. Love knows love. Heart knows heart. My Christmas wish for you is a LEAP OF JOY, the heart lift that comes when you are surprised by Love and reminded of the goodness of your life and the people who are in it. We have her with us for 7 days and it will go by way too fast and we’ll have to share her with other friends and family and it may be another 6 months before we see her again - though I hope not - so I am going to soak up every minute of it - and remind myself not to hover or parent too much or dread her departure two days after her arrival. No foreboding joy. Just present moment awareness. Just gratitude for the gift of her in my life. @kearakirks
It’s beginning to a lot like Christmas (in San Diego). I met my last pre-Holiday deadline around 4 pm this afternoon and decided to celebrate with a walk on the beach. The Universe decided to celebrate with me. Keep going until you see the final view. For all you liturgical nerds out there, we just celebrated #gaudetesunday a couple days ago. The color was pink; the theme was #joy. I’m calling this #gaudetetuesday -holier than heck and it had me dancing in my bare feet in the sand and water.
%d bloggers like this: