I don’t often get political in this forum, but I’m going to take a risk and go there today. As Election Day nears, it seems to me that barring any extreme revelations everyone has settled on whom they are going to vote for and why. We’ve come to terms with our decision and I’m not going to try to convince you otherwise. I appreciate that during this painful election season, most of us have had to dig a little deeper than usual. Instead of simply pulling the lever along party lines, we’ve had to consider what is of ultimate importance to us, what we can live with and what we can’t live without. I think it’s healthy that my kids are being exposed to so many heated conversations at the dinner table, even though Tim and I consistently vote the same way.

But if you live in California there is an issue you may not have decided on yet: the two death penalty propositions.

Let me say right off the bat that I do not believe in the death penalty. From the research I’ve done, it fails to work as a serious deterrent to crime, as a cost-saving measure, or as an instrument of justice, but I do understand how significant it must feel when a perpetrator forfeits their life in payment for their crimes. I’m not saying it’s an easy decision to make, but if you are conflicted about which is the better option, I’m hoping you’ll read on.
For the last decades, the end-the-death-penalty movement has been growing across the nation and in each election cycle, Californians get closer and closer to making the decision to end the practice in our state. In fact, we got so close four years ago that Prop 66 was written simply to confuse the issue and keep the death penalty in place. The motto of Prop 66 is that they can “mend it not end it,” but I don’t believe that’s possible and certainly not according to their method, which is to hurry up executions by REDUCING the number of safeguards. The efficient answer isn’t the right one in this case, nor does it address any of the greatest moral and practical objections to this increasingly rare method of justice. You might be surprised to see the company we keep on a global scale by maintaining this practice. Check it out here. (Spoiler Alert: China, North Korea and Iran make the list.)

But apart from practical reasons for abolishing the death penalty, I feel even more strongly about the moral ones. As most of you know, I have some personal experience with being “pro-life.” I was raised a Catholic Christian and part of my upbringing was to honor a “consistent ethic of life,” in the words of the late Cardinal Joseph Bernadin, from “womb to tomb.” That ethic played a huge role in my decision to change the course of my life at 19 and become a birth mother. Abortions were safe, affordable, and readily available and many friends urged me to make that decision. It could have all been over within 24 hours of that positive pregnancy test, but I believed in the value of protecting a child’s life over preserving the privileged conditions of my own. I believed it on an intellectual and moral level, but I also believed it on an instinctual one. We are made in the “image of God” and I was not about to extinguish that Divine spark. Instead, my desire has always been to nurture that spark within myself and at the very least, claim and hold space for it, especially when others don’t see it in themselves, or their enemies.

But being “pro-life” was never a political litmus test for me, because having that ethic goes so far beyond simply outlawing abortion. Conception and birth are the first steps of life, but they are not the only ones that matter. I love this statement by Sr. Joan Chittister clarifying the terms for her audience. 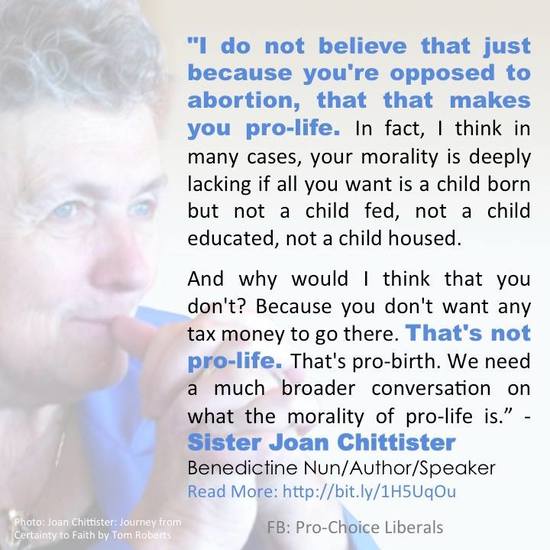 It’s easy to cherish those first few breaths of innocent life, but we are by no means allowed to forget the rest. I love how Richard Rohr puts it. When people insist that “God loves innocent life,” he responds, “Oh dear, I hope not!” for who among us is innocent? Beyond the implications of what “pro-life” means when it comes to social services, education, and our moral obligations, for me, being “pro-life” is also reflected in how I respond to end of life issues such as suicide, aging, euthanasia and mental health issues.

And if you aren’t “pro-life,” but are pro-justice, then please consider the fact that innocent people die through our use of this instrument and that is not justice. More and more DNA exonerations take place every year. Additionally, prisoners on death row are overwhelmingly people of color, of poverty, and of limited mental capacity and that is not justice. Their percentages are not commensurate with the rate at which they commit heinous crimes, but are rather a direct reflection of the life-saving privilege that money, color and connections can buy. If you believe that #alllivesmatter, then voting Yes on Prop 62 and No on Prop 66 is one way to stand up and show your support for the lives that many would rather forget. Prop 66 does nothing to address these (and other) deeply unjust patterns.

Grappling with this subject is difficult, especially if you were raised to believe that all people were equal in the eyes of the law and that justice would always be served when it simply isn’t true.

I don’t have the space here for the data and detailed statistics arguing why the death penalty doesn’t work. Other people have done it passionately and effectively, so I’m sharing a list of books and films that have shaped my thoughts on the subject. And there are a lot of thoughts to be shaped!

And finally, I want to address one more issue. One of the biggest arguments for keeping the death penalty in place, and one of the hardest to refute, is that  so many of the victim’s families want it to remain. I cannot even pretend to know the depth of their pain, but in the case of many families, the execution of justice through the death penalty did not bring them the relief they sought. After having gone through the process, more and more family members are speaking out against the death penalty. Here is a small collection of their testimonies, as well as the example of Tamika Brown that I wrote about in early 2015.

For more information, you can check out Death Penalty Information Center, or Yeson62.com

Finally, if you are Catholic and want to hear an extensive interview with Jennifer Bonakdar, Yes on Prop 62 leader, as well as Beth Webb, a sister of a murder victim, who is opposed to capital punishment, you can tune in HERE to the Immaculate Heart Radio replay.